The silver Peace Dollar coin remains among the most sought-after coins yet created by the United States Mint. Experienced coin enthusiasts may demand coins from every year created because Peace Dollars were only manufactured in small amounts and for a few years.

If not uncirculated, 1925 Peace Dollars are nothing more than the price of silver: So, as the cost of silver shoots up, dates like the 1925 work their way to melting furnaces since the worth of the metal is becoming larger than the worth of the piece.

1925 High Grade $1 Coins Are Abundant: Choose the grade level from MS-60 to MS-67, and samples will be provided on a routine basis. For this date, avoid the lower end of the grading range, say MS-60 to MS-63, and aim for MS-65 if your budget is limited and MS-66 if you want exceptional quality.

you should remember that if you travel this up high in the grading scale, a few of the rarer dates in your collections could fall behind in grade. Beware of coins with ageing or markings on Miss Liberty’s neck or face. When you locate the proper coin, this common date may be unusually stunning.

Due to the rich historical relevance, silver content, and appearance, the 1925 issue is widely valued by coin collectors. 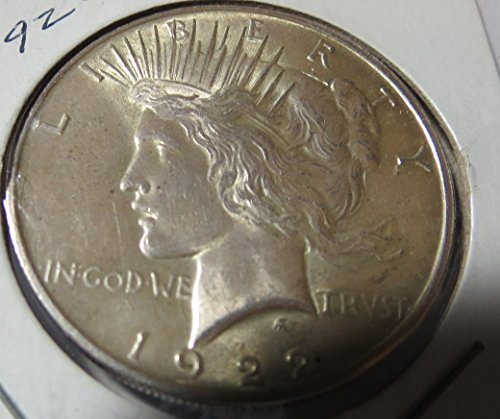 What Is the Grading System for These Coins?

Very fine– Liberty’s hair appears to be pretty worn. From around ear, a few strands of hair remain highly defined. A section of the eagle feathers on the upper and outer border of the right wing remains evident.

Extremely fine– The hair lines across Liberty’s brow and ear are firm, but slightly weathered. Every eagle feather just on top and outer border of the right wing is noticeable yet dim.

MS 65 gem uncirculated– This coin has a lot of brilliance and attraction. There may be a few small touch lines, although they are scarcely discernible.

The Peace Dollar’s front wording states, “Liberty; In God We Trvst (Trust); 1925.” And the backside of the same coin reads “United States of America; E Pluribus Unum; One Dollar; Peace,”.

The front of the piece depicts a female figure looking left with a peaked crown and long hair. The Peace Dollar back depicts an eagle perched on a rock in the middle, with rays in the rear. 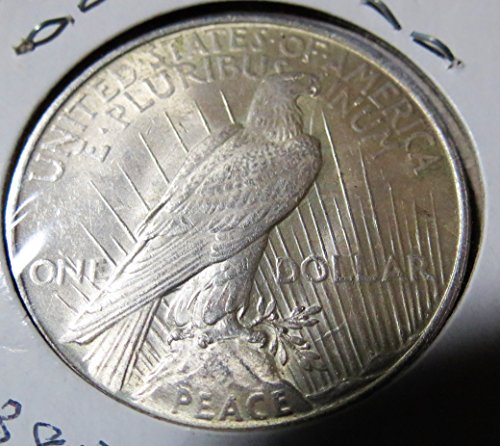 Peace Dollars are over 100 years old, and several of the Peace Dollars for sale might now show considerable indications of damage due to their age.

Considering that such coins were intended for distribution, this is not unexpected. Peace Dollars are also accessible in brilliant, numismatic form, despite the fact that most of these pieces reflect their antiquity.

When existent, the mint mark may be seen upon the back side of the coin, underneath the inscription “ONE.”

Millions of high-quality 1925 Peace dollars were made by the Philadelphia Mint. Several were held in vaults mostly by sacksful till the liberation of hoards in the 1940s and 1950s and were regarded a frequent date in the Peace dollar sequence. Pieces of great quality were strongly struck and have a high level of shine.

Check out How Much Is 1925 Wheat Penny Worth? (Answered)