The Washington silver quarter was first made by the US Mint in 1932. This design graced the quarter coin honoring George Washington. Although the appearance of the coin appeared unmodified, the method by which the quarter was created was entirely revised later in 1965.

As a result, the coins made before 1965 are much more valuable to collectors due to their silver content. Read on below to find out what the worth of a 1962 silver quarter is.

The face value of this silver quarter is $0.25. However the quarter can be sold for way more than that based on its condition. The value of the 1962 quarter depends on different factors such as the condition, grade, and the presence of a mint mark.

In extremely fine condition, the 1962 half-dollar with the absence of a mint mark is valued at roughly 6 dollars. The quarter with an MS 60 rank is worth approximately 9 dollars in uncirculated condition. MS 65 grade, uncirculated coins can be purchased for about 15 dollars. Philadelphia minted 36,156,000 of these silver quarters.

The other version of the quarter made in Philadelphia, the Proof coins with no mint mark are available to buy, and in PR 65 condition, they are worth roughly $12. A total of 3,218,019 proof coins were produced.

The thirty-first edition of the Washington quarter was produced in Philadelphia and Denver in 1962. Philadelphia issued proof quarters along with the standard coins that year, both of which are missing the mint mark. On the other hand, the Denver mint quarter bears the D mint mark.

On the other hand, the 1962 coin with a mint mark of D is valued at roughly 6 dollars in extremely fine condition. Coins with an MS 60 grade are worth around 9 dollars in mint condition. MS 65 uncirculated coins can be purchased for nearly $17.

In a circulated condition, looking at the current silver price, which is $24.86 per ounce, the silver melt worth for this silver quarter is 4.50 dollars. 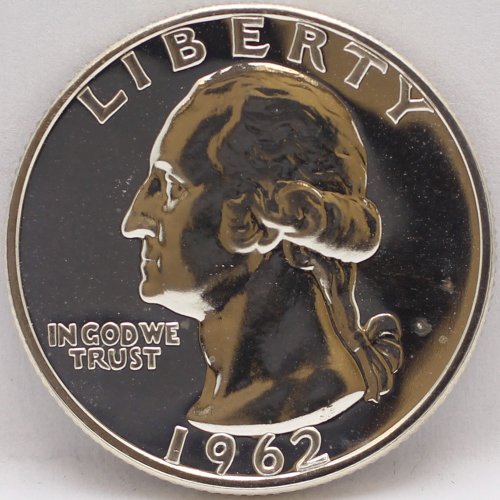 The Three Varieties of the 1962 Silver Quarter

The rarity of the coin is what makes its worth increase more. Three different variants of the 1962 coin are present, which a coin collector or investor should keep an eye out for. The type of coins listed below will sell for way more than the standard 1962 quarter.

The composition of these silver quarters was changed after 1965 due to the fact that silver had gotten more expensive.

The Grading of the 1962 Quarter

Very Fine Condition: The coin, in this case, has been circulated for quite a time. The quarter may not be significantly damaged, but the signs of wear and tear will be present with the surface of it being smooth.

Extremely Fine Condition: The quarter has a very brief exposure to the open market in this condition and might have received a few damages, but the appearance appeal of the coin is still majorly present.

Uncirculated Condition: In this type, the coin has never been in the open market and preserves its original luster. The details will be as sharp as if it was just issued.