The 1964 penny is also known as the Lincoln penny, and they don’t have an incredibly high value. However, if you find these pennies in uncirculated condition, you might be able to sell them for a high price. Remember that even such a value will not be too high.

So, if you want to understand the worth of a 1964 penny with no mint mark, you are in the right place. Here is what you must know.

On the other hand, if the penny is in an uncirculated condition with MS-65RG grading, then it will not be worth more than a dollar. So, you will not get a significant value for this. Of course, if you still wish to sell the coin, you can.

There are many 1964-proof pennies that don’t have a mintmark. Remember that even these pennies will not have significant worth. You will only get a premium for them in uncirculated conditions with high grading.

So, in the PR-65RD condition of the uncirculated 1964 proof penny will not be worth more than $1.5. According to the US mint, there were more than 3 million proof coins that were minted for this penny. Because the proof pennies are common, their value is not too high even in uncirculated conditions. 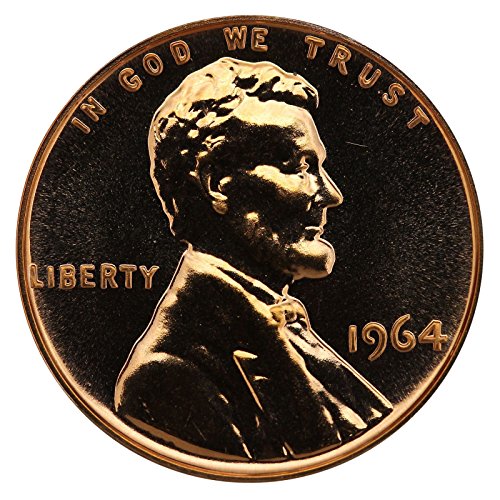 The 1964 SMS Penny has an interesting story behind it which led to the creation of this coin. During the early 60s, there was a significant shortage of coins because most of the silver hoarders removed the silver dimes, half dollars, and quarters from circulation. Many Mint officials blamed the collectors for creating this shortage.

After that, the US Mint was trying to focus on creating more coinage that circulated properly. Because of this, they temporarily stopped producing the uncirculated proof sets and annual sets. Besides that, they also optimized the production of coin sets to one collector product, known as the SMS (Special Mint Set).

The 1964 SMS penny includes coins of each denomination. Besides that, it has a finish such as satin, making the coin appear and feel even better than the others.

It is important to understand the 1964 SMS penny you have is a real one. Remember that you will not find these coins in change as they only appeared in the SMS set. However, you can still find these pennies and tell if they are real or fake.

For example, the SMS penny will have a satin-like finish and will not be reflective as compared to a regular penny. On the other hand, the details and the strike of this penny will be much sharper than the strikes we see in circulated coins. Finally, the strongest details you will get to see on this penny are on the rim.

You will find that the rim of this 1964 penny is square. Such a shape also looks similar to the 1964 proof penny, so don’t forget to check these details if you want to understand the authenticity of your penny.

Fortunately, the 1964 SMS penny has a significant value worth thousands of dollars. For example, if you have this penny in mint condition and a high grade, it can be worth at least five thousand dollars. You can sell this to earn a fortune in no time.

However, these pennies are rare, and most of them are already with collectors. Of course, if you ever come across this penny, you must hold on tight to it. After that, you can sell it to earn thousands of dollars without making much effort.