Over the last hundred years, The United States Treasury has minted a lot of unique coins

Out of all those beautiful coins, The 2020 BAT Quarter, also known as the American Samoa National Park Quarter, is possibly the most unique coin ever minted in the US.

The coin gets its name from the picture of fruit bats engraved on the reverse of the coin.

The fruit bats can be found in large numbers in American Samoa however their population is on a declining curve.

So, these coins can also act as a remembrance for people to stop hunting these bats.

What is the value of a BAT quarter?

The circulated Bat quarters are usually worth their face value of $0.25.

However, BAT quarters in uncirculated condition and proof coins can still get a lot of money.

However, their valuation also depends on the mint they were minted. The grading scale goes up to 70.

So, if you have an uncirculated BAT quarter that has been graded over 65 then you will easily be able to get over $2.28 for it. 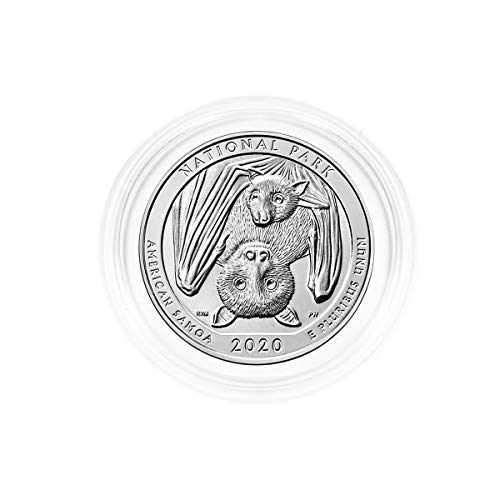 As already mentioned, the Bat quarter in circulated condition is worth its face value of $0.25.

However, the following table will help you understand the valuation of 2020 Bat quarters in uncirculated and proof condition:

These values are taken from USA Coin Book

Do Bat Quarters Have Any Melt Value?

The bat quarters are composed of nickel and copper with copper having the higher percentage of composition.

So, its melt value will be equal to the combined melt value of copper and nickel.

However, the 2020-S Silver proof coin has a higher melt as those coins are made with 99.9% fine silver.

What Is the Auction Record for The BAT Quarter?