The 1976 two-dollar bill is relatively old but may have a higher worth depending on multiple factors.

If you want to know more about the value of this bill, you’re in the right place.

Here is everything you need to know about the 1976 2 dollar bill value.

In 1976, the government re-issued the two dollar bills as federal reserve notes. This is why they were also known as the Bicentennial Two. Besides that, the bill was also redesigned and had the exact worth of $2 in a circulated condition.

However, the bill can be worth more if you have it in an uncirculated condition. Typically, you can sell such a note for $9 to $15 and make some profit. You may also come across some two dollar bills with a slight premium worth.

You must remember that circulated condition means the bill has been designed for everyday transactions. This means you can use it to purchase things at the supermarket or other stores. It may also be worn-out, which further contributes to its low value.

Meanwhile, an uncirculated bill is not used for everyday transactions. Instead, they are mainly purchased by collectors and are worth more than the value of the actual note. Typically, a bill with no signs of wear and tear is considered uncirculated.

So depending on the condition, you can sell your two-dollar bill at its actual value or a higher amount. Usually, you can get two to three times more than the worth of the bill. However, sometimes you can get even more if the buyer is a keen collector. 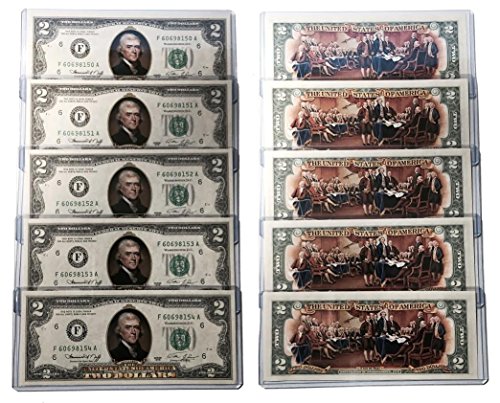 How Do I Know If My 2 Dollar Bill Is Worth Anything?

You can use many things to understand if your two-dollar bill will be worth more than its face value. For instance, you should check the note’s serial number. Typically, bills with palindrome digits have a higher value than the standard worth.

Bills with palindromes are also known as radar notes in the financial sector. They are notes with the same serial number when read backwards or forward. This is why you can sell them for $9 or more, depending on how much the other party is willing to pay.

Besides that, two-dollar bills with repeated serial numbers are also considered valuable and rare. So you can sell these notes to a collector at a high price to make some profits. Another thing to remember is that uncirculated bills are also worth more.

Is There Anything Hidden On A $2 Bill?

The 1976 two dollar bills were produced in a high quantity during that era. This is why they are not considered rare, as per the authorities. However, the notes are still scarce due to some misconceptions. Many people have removed the bills from circulation to sell them to collectors.

Some people believe that the bills are rare and have hidden features that add to the value of the notes. However, that is far from the truth. There is nothing hidden on a two-dollar bill. This is why you should avoid purchasing the notes at a higher price.

Typically, the bill is worth more than its value if it has repeated or palindromic serial numbers. The note also has a higher worth if it has been in an uncirculated condition since the production.

Can I Get 2 Dollar Bills From The Bank?

The 1976 two dollar bills are relatively scarce in the market, and you may not get them from most places. Many people are selling the circulated notes by marketing them as uncirculated. However, you can still get the bills from the bank without any issues.

Of course, you must remember that you will have to ask the bank employee to give you the note. Most banks carry a stock of these bills and will provide you with them if you specifically ask for the note. The number of two-dollar bills that banks have varies.

However, most banks will give you the bill when withdrawing cash or converting the currency. Of course, you must ask the staff for the specific two-dollar note in all cases. Otherwise, you will get the more recent bills from the bank.