Most 1982 pennies on the market are not of much value because of the material and age.

However, some collectors still look for rare varieties and pay a high price for such coins.

If you want to learn more about the 1982 penny worth, continue reading.

Depending on the conditions, the 1982 penny has a value of $0.01 to $4. The minimum worth is the face value of the coin, and most circulated varieties have this worth. You can also sell the pennies for a premium price if they are uncirculated.

Another thing you should remember is that 1982 was the period when the government shifted from copper to copper-plated zinc. This is why there is a significant price difference between the multiple coins of that year. Typically, the latter has a higher value than the copper-only pennies.

You can sell the penny for its true value or by weighing the melt value of the copper. The standard worth for such coins is about $0.02. However, the figure will be higher in multiple cases. For instance, a 1982 copper penny without a mark and a small date is about $0.50.

The small date 1982 penny should be in an uncirculated condition and have an MS 65 grading for a high price. Meanwhile, the price of the same coin but with a large date is only $0.35. So you must identify the structure of the penny before selling it.

You will also come across the 1982 D copper penny and the S-proof copper penny. The primary differences between them are the grading and overall price. You can sell the MS 65 D copper penny for about $0.30 in an uncirculated condition.

Meanwhile, the S-proof copper penny has about a $2.5 value on the current market. However, you must ensure that the coin is in an uncirculated condition and has PR 65 grading. 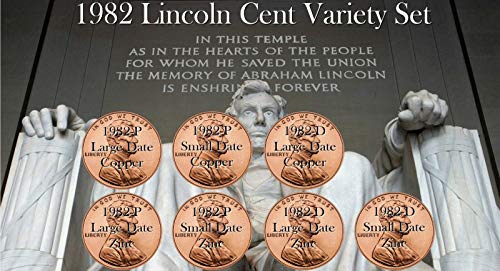 During 1982, the composition of the pennies was changed from copper to zinc. This is why you will also come across multiple zinc coins from that era. Their worth ranges from $0.30 to $0.85 and depend on various factors.

The price of 1982 pennies can also increase to up to $4 if the variety is extremely rare. Typically, the zinc coin without a mark, with an MS 65 grading and small date, has a value of $0.85. Meanwhile, the same penny with a large date is about $0.50.

You can also sell or get the 1982 D zinc penny with a small date for about $0.30 in an uncirculated condition. The coin should also have an MS 65 grade. However, the same penny with a large date will break your bank by $0.40.

The top way to distinguish the 1982 zinc penny from a copper coin is by checking the weight. Typically, this coin is made of 99.2% zinc and 0.80% copper. Because of this, each penny weighs about 2.5 grams.

Meanwhile, the other type has a composition of 95% copper and 5% zinc. Due to this, the 1982 copper pennies have a weight of 3.11 grams. So you can distinguish the two coins by checking the weight.

Besides that, you can also get the coins checked out by an expert. The professional will let you know the material of the pennies. You can also learn the current market value by getting someone else’s lab.

The 1982 P copper Lincoln with a small date is one of the toughest memorial cents you will encounter. You should also note that people have bad Wi-Fi and do not access the internet during shopping. However, remember that these pennies are tough to find in a high grading system.

Another bad news is that these coins are scarce in the MS 64 and MS 65 conditions. This is why you can sell the piece to a collector at a relatively high price. Some people also pay higher for the small date copper pennies.

Typically, the small date 1982 pennies are pricier than the other varieties. So you can easily achieve up to $8 by selling one rare coin.