Eisenhower Dollars or famously known as the “Ike Dollars” are the last of the big and bold coins produced by the United States Mint for circulation. Although some were popularly used in the casinos on the west coast, these coins never circulated widely in most of the United States.

If you have any 1976 Eisenhower dollar coins, you might be in luck!  Keep on reading to find out what makes a 1976 dollar coin worth thousands of dollars.

How much is a bicentennial dollar worth?

The Type I dollars struck in 1975 and went into production upon its pairing with the head’s side Eisenhower portrait by Frank Gasparro.

A total of 4,019,000 Type I clad dollars with no mintmark were made at the Philadelphia Mint.

In circulated condition, these Type I clads are worth around $2 and for uncirculated grade around $10 to $20.

The most valuable 1976 Type I clad Bicentennial goes to a most unlikely error and was sold in 2014 for an amazing price tag of $28,200. This record grabber 1976 quarter was struck with the 1976 Bicentennial dollar design and was graded MS64 by Numismatic Guaranty Corporation.

Type II dollar coins have the crisper, more refined lettering on the tail’s side of the coin.

In worn grades The 1976 Type II clad dollar coin trades for around $1 and $4 to $10 in uncirculated condition. 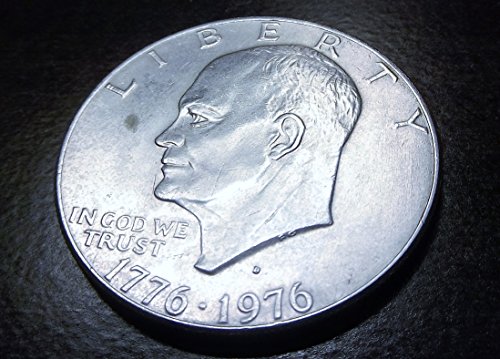 What is the value of the 1976-S silver uncirculated dollar coin value?

In 2019, the most valuable 1976-S silver uncirculated dollar coin was graded MS69 by Numismatic Guaranty Corporation and sold for a whooping $4,560.

Although the coins were offered in a unique 3-piece proof set, not all of these silver proof dollars were sold.

Why is Eisenhower’s face in the Bicentennial dollar coin?

In 1935,  the era of the peace dollar coin ended, no dollar coin in print since then. The collectors felt the bullion prices were on the rise in 1965. Hence, the United States Mint started striking copper-nickel coins rather than silver coins.  As a result, legislators made an effort to reestablish a dollar coin.

Many people proposed to print the new dollar with Eisenhower’s face to honor his death. Eventually the proposal was heard and In 1971  the United States Mint started issuing the Eisenhower dollar coin.

Are any bicentennial quarters valuable?

In circulation, they are worth no more than face value while uncirculated coins and special edition coins are valuable.

Bicentennial quarters were minted in 40% silver.

How Much Is a 1976 Bicentennial Dollar Worth?