Coins have long been a collectible item, and most of us remember looking for old pennies or nickels as mementos as children, and for some, the habit stayed even as adults.

One of the coins that got famous was the presidential coin when the government first issued it back in 2007.

If you still have some presidential coins lying around in your house, read on below to find their worth now!

How Much Is a Presidential Coin Worth?

The presidential coin act was made back in 2007 to honor the deceased presidents of the United States. Before a coin can be minted, the former president must be deceased for at least two years. The series of these coins is different, and each has its own worth. They were available for purchase from 2007 to 2011, after which The US mint exclusively marketed coins manufactured from 2012 onwards as uncirculated numismatic coins.

The thing in common for all series of coins is that they’re made up of 88.5% copper, 6% zinc, 3.5% manganese, plus 2% nickel weighing almost 8.1g. The U. S. Mint issued the Presidential dollars in three locations: Philadelphia coins which were minted with P, Denver coins had a D mark on them, and the coins made in San Francisco had S marked on them and were available in proof condition only. The mint mark appears on the coin’s edge directly after the year. 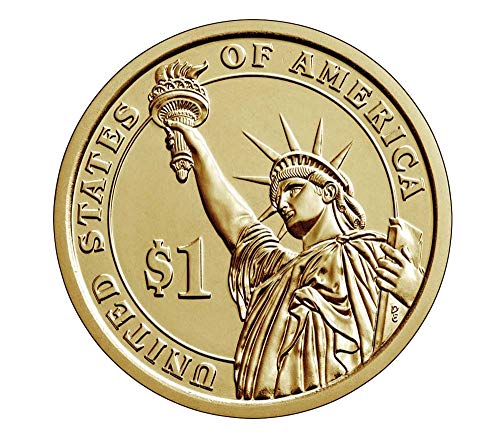 The Most Valuable Presidential Coins

A lot of presidential coins were issued, the first one was in respect of George Washington, and the last one was for George H.W. Bush. Even though the majority of these coins are not worth much, some of them are valuable if in a circulated condition and were minted with an error, such as:

How Many $1 Presidential Coins Are There?

From 2007 to 2015, Presidential Dollars had been produced at a pace of four variants every year, with three designs issued in the series last year in 2016. However, In 2020, a separate piece of legislation introduced one more coin to the collection.

What Errors Were Present In The Presidential Dollar Coins?

If you have presidential coins at home, then search for ones that have errors in them, as that increases the value of these coins. A few of the noticeable mistakes in the coins included:

Can You Still Get Presidential Dollar Coins At The Bank?

After 2012, the fresh editions of the series were not supplied to banks. Instead, the coins can only be acquired through the United States Mint’s numismatic items or secondary market outlets.