Roger Clemens is certainly among the most qualified Hall of Fame candidates with the toughest and hardest-throwing pitchers to ever take the mound during his 24 seasons in the league.

This article will walk you through Roger Clemens’ baseball card and its possible value.

How much is a Roger Clemens baseball card worth?

This is card #273 in a set of 660 cards. You can see Donruss logo in the upper-left corner and the reverse side is instantly recognizable as a Donruss design. The estimated value of this card is $160.

Topps Tiffany high-gloss version is certainly the most sought after by many avid fans. The print run is estimated at just 5,000 complete sets and mint graded copies can approach $200 at auction.

The 1985 Leaf set was released with 264 set of cards and Clemens is card #99. It features both English and French text and in the upper right the mention of the Leaf company. The estimated value of this card is $325.

This is a rookie card  set which also featured rookies Doc Gooden and Kirby Puckett. Donruss included 660 cards in their set with Clemens’ card #155.

The image clearly shows Clemens’ face being intense during the game. This card represents a more serious tone with an estimated value of $350.

This is card #181 in a huge set that contained 792 cards. The 1985 Topps design features a great color scheme and Clemens’ face with a nice smile.

This most sought after of all his fans. In Tiffany form the price can easily reach over $3,000 in top grade.

This is card #27 in a set of 132 cards and the estimated value is $600. Clemens face and the clear blue sky background make this card appealing. 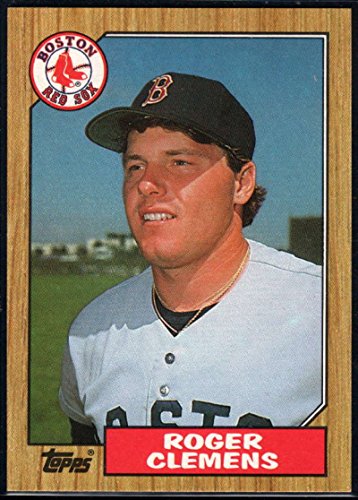 Clemens played college baseball for the University of Texas Longhorns before being drafted in 1983 by the Boston Red Sox. The talented player made his major league debut in 1984 after spending one year in the minor leagues.

Roger and Debbie Clemens exchanged vows in 1984. The couple has 4 children together: Kacy, Koby, Kory, and Kody. They are currently residing in Roger’s childhood place, in Texas.