The critical difference between these two blue gemstones is their mineral composition. Lapis lazuli is mainly composed of lazurite, calcite, and pyrite. On the other hand, sodalite is part of a mineral group called feldspathoids, containing sodium, potassium, and calcium.

Both lapis lazuli and sodalite are a rich deep blue color, with flecks of white running through them in veins or patches. As such, both gemstones were used for jewelry or ornamental purposes throughout the centuries.

These differences are further explained below as we answer the following questions:

The two stones may look similar, but there are several critical differences between lapis lazuli and sodalite.

Chemically, lapis lazuli is a rock composed of lazurite, calcite, and pyrite. Sodalite is a silicate mineral that is typically blue and contains sodium, potassium, and calcium.

Lapis lazuli is actually a collection of several minerals; therefore, it does not have a uniform hardness. However, it has a Mohs hardness rating of between 3 to 6.5. Sodalite has a hardness between 5.5 to 6 on the Mohs scale.

Lapis lazuli is historically the older of the two stones, with origins in ancient Mesopotamia and Egypt. Sodalite was first discovered in Greenland and has since been found worldwide from South America to Namibia, Canada, and the United States.

Lapis lazuli was considered highly precious in ancient times because of its rich color, beauty and rarity. For this reason, it was often used in jewelry and other decorative items. Sodalite has been less popular throughout history but is becoming more well-known in recent years.

Metaphysically, lapis lazuli is a stone that protects its wearer from negative energy and evil spirits. It is also believed to enhance intuition, wisdom and inner truth. Sodalite helps its wearer achieve a clearer mind and calmer emotions by improving self-esteem, self-trust, and self-acceptance. 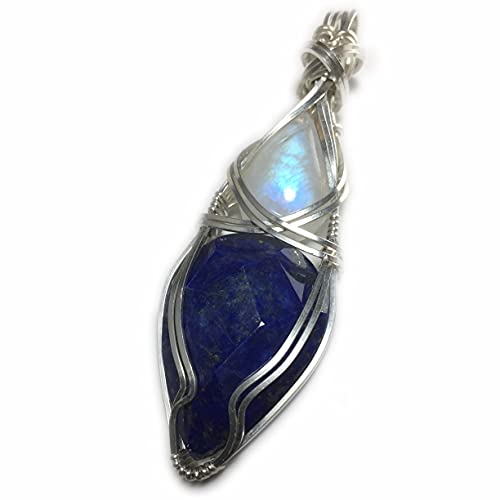 How Can You Tell Fake Lapis Lazuli?

One of the easiest ways to determine authenticity is by its color. Genuine lapis lazuli stones will have a deep blue coloring. You can tell if it is a high-quality stone by looking for the presence of iron pyrites, which will shine in the sunlight and look like gold dust.

Some fakes will often be lighter in color, less vibrant, opaque in appearance and may not have the same metallic flecks as a real stone.

Another way to spot a fake is by checking for its consistency. Genuine versions of lapis lazuli will have a consistent color and pattern throughout, while fakes may be more splotchy (especially if they are a combination of various dyes).

Does Sodalite Have Gold Flecks?

Instead, sodalite only has white streaks running through it, which are caused by the presence of calcite. These streaks will be present in any genuine sodalite stone.

The sodalite with gold flecks is likely fake or treated. These stones may also have been dyed to produce the blue color and gold flecks added in later.

What is Sodalite Good For?

Sodalite is said to help you feel calm and at peace. It’s also known to help with self-esteem and confidence, making it a great stone for those who struggle with these issues. Sodalite can also help with verbal and written communication, making it an excellent choice for professions requiring good communication skills.

Also, sodalite brings emotional balance, so it can be helpful for those who struggle with mood swings, panic attacks, or other issues related to emotions.

Sodalite is also helpful for those who want to learn more about themselves and the world around them because it increases intuitive abilities and personal insight. It’s a stone that can help you get in touch with your higher self, leading to spiritual growth.