When compared to the rest of the old coins, the 1926 silver dollar is much more rare to find hence having considerable importance in the eyes of coin collectors and investors. Although these peace coins were minted for a short period from 1921 till 1928, most of them ended up being lost or melted for the silver. To find out what the worth of the 1926 silver dollar is now, scroll down!

These dollars were minted at three different locations, Denver, San Francisco, and Philadelphia. The coin which was struck in Denver has the mint mark “D” present; in a similar way, the San Francisco dollar is represented by the mint mark “S.” Both of the mint marks are present on the reverse side of the dollar close to the rim, underneath the word “ONE.” The coins made in Philadelphia, however, had no mint mark present. The total amount of silver dollars minted in 1926 was 11,267,000.

When it comes to the value of the coin, the state it’s present in matters a lot. The face value of the peace coin is 1 dollar, but it always sells for a higher price. If the coin has been in circulation, it will sell for the worth of its weight in silver, which is 19.93 dollars. 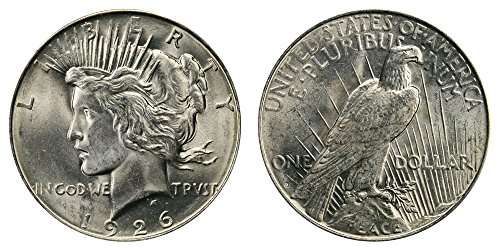 What makes a 1926 silver dollar rare?

Retaining their luster and staying undamaged is rare for a silver dollar made in 1926; that is why the uncirculated coins present are worth a lot of money. So, when deciding to buy this coin, it’s important to make sure that you don’t get the fake uncirculated coins that have been cleaned to hide the damage they contain.

The Design of the 1926 Peace Silver Dollar

Anthony de Francisci, an Italian-American artist, developed the silver dollar after winning a competition sponsored by the US Commission of Fine Arts. He modeled the coin’s front side after his wife in which she wore a crown along with her hair blowing in the breeze to signify Lady Liberty.

The phrase LIBERTY appeared above, with the mint year underneath. This obverse side also featured the phrase IN GOD WE TRUST.

Originally, de Francisci envisioned a bald eagle severing a sword for the reverse side of the coin. The purpose of the design was to represent the conclusion of WWI and the dawn of a new peaceful age. But, in the end, he ended up sculpting an eagle holding olive branches in its hand.

How Is the 1926 Silver Dollar Graded?