The U.S Mint in 1940 produced a new series of dimes which are known as the Winged Liberty Head dime.

As the older designs became outdated, the new ones were made as a replacement.

This was a great choice as the 1940 dimes look was loved especially by the coin collectors.

Even though now the dimes aren’t in circulation, they still hold good value in the eyes of the numismatist.

The worth of the 1940 dimes at present is discussed in this article. 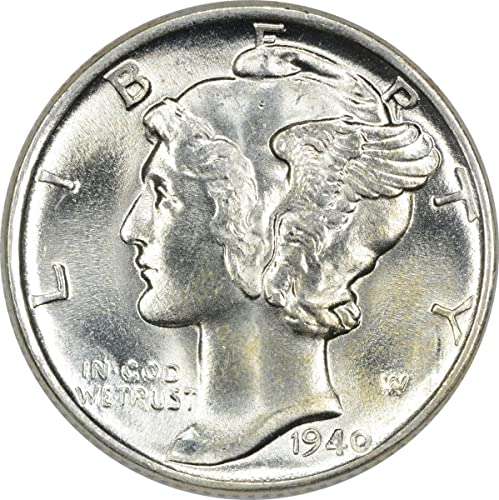 As the 1940 coins were made majorly of silver, they’ll always sell for more than their face value which is $0.10. The dimes sell for $1.38 even if they’ve been in circulation before.

Though the collectors want these coins in mint condition, it’s not quite easy to find them in them. As they were minted in three different areas, the value of each coin series depends on the mintmark, condition, and rarity.

The Mercury dimes having no mintmark can be worth $2.96 in fine condition, while their value is around $3.22 in extremely fine conditions. On the other hand, in uncirculated conditions, the value of these dimes can be $6.96 in MS 60 grade and $35 in MS-65 grade.

The other version of the 1940 dime were ones with the mintmark “D” or “S” inscribed on them, depending on where they were minted. These coins are worth the same as the ones with no mint mark in fine and extremely fine conditions.

If you have the uncirculated MS-65 condition, then the value of the marked 1940-D dimes is around $39. Just like in the previous years, some proof coins were released in 1940 in a limited quantity which was made especially for the collectors.

Look at the table below to know more about the value of the 1940 Dime in different conditions. The values are in USD.

These are the estimated values on which these coins are usually sold; however, at times, if the dime looks as good as a newly produced one, it can sell for thousands of dollars.

Looking for the value of other coins from 1940? Read more of our guides:

Before the 1940 dime were minted, the ones produced in 1916 were in circulation and lasted for 25 years, after which the U.S mint decided to upgrade the design. That’s when the Mercy dimes came into the picture, minted in three locations; Denver, Philadelphia, and San Francisco.

Design of the 1940 Mercury Dimes 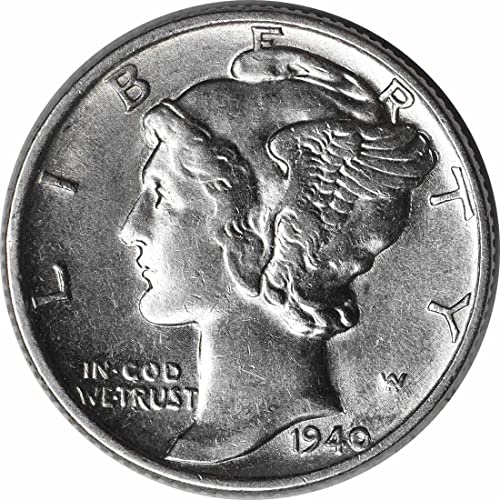 If there were a list of the world’s top beautiful coin designs, the 1940 Mercury dimes would surely have its name there. The engraver, Adolph A Weinman, who was tasked with creating a design for the front side of the coin, used Elsie Kachel, wife of a known poet, Wallace Stephen, as an inspiration for Liberty.

The dime was created using silver and copper, but the former metal was used in a higher percentage. Out of 100, only 10% of copper was used, while the rest of it is silver.

The coin is sometimes known as the Mercury dime as the portrait of Liberty with a Phrygian cap gives a deception of the Roman messenger god. However, the design was used as symbolize freedom.

The obverse side also features the phrase “In God We Trust” on the lower portion of the coin. On the reverse side, you can see the fasces with olive branches next to them.

This collectively represented peace, unity, and strength. On top of the coin, the text “UNITED STATES OF AMERICA” is engraved. 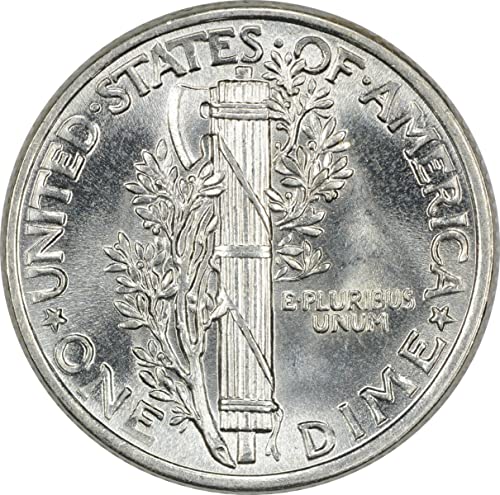 A few of the 1940 dimes were minted with an error in them. It’s a known fact in the coin world that any coins with errors typically sell for a lot more.

The most famous error of the Mercury dime is the line that’s supposed to separate the horizontal bundles in the middle of the wooden rods is missing.

While some error coins have some of the inscriptions missing, look closely and evaluate the coin as if an error is found, it’ll be worth much more even than the uncirculated coins.