The 1956 penny is known best for its numismatic value. Most coin dealers like this coin because it is considered the most iconic Lincoln cent in the history of the United States.

Since this 1956 penny is not minted now so people who are not passionate about the coins are not aware of the existence of this coin. Victor David Brenner made this 1956 Lincoln penny and they can be found in circulation today. 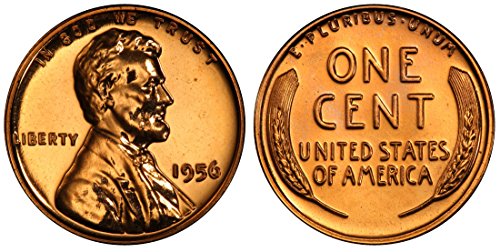 The 1956 Lincoln penny is worth 0.12 dollars in extremely fine condition. If this penny is found in fine condition then its value is 0.10 dollars. Proof 1956 penny can be sold for about 8 dollars and in 2005 the professional coin grading system graded the 1956 D cent as MS-67 and sold it for 7,475 dollars.

What is the Value of the 1956 Lincoln Penny?

The 1956 wheat penny that has no mint mark and the 1956 D penny have the same values. Each coin has a worth of about 10 dollars in very fine condition.

If it is in extremely fine condition then its value is 0.12 dollars. If the coins are in uncirculated condition then their value is around 0.30 to 0.35 dollars and they have a grade of about MS-65RB and they can be sold for about 1 dollar.

Proof coins are also available, they lack the mint mark and they are around 10 dollars’ worth in PR 65 condition. A total of 669,384 proof coins were minted.

Chart of Values of 1956 Lincoln Penny

There is an error that is found on the 1956 Lincoln Penny. The error can be seen on the obverse side of the 1956 coin the minted mark D is minted above as a shadow D.

The grading system of the 1956 Lincoln penny is divided into the following:

Very Fine: The coins in this grading system show Lincoln’s cheekbone and jawbones are worn but separated from each other. All the details present on the coins are sharp.

Extremely Fine: The coins present in this system have only slight wear and the details on these coins are sharp.

MS-65RB Gem Uncirculated System: The coins present in this system have a strong luster and an eye-appealing appearance. The contact marks and blemishes are present on them but they are not noticeable. Their color is also red-brown.

PR 65 Proof System: The coins present in this system have no flaws and only a few blemishes are present on them.

What Errors are Present on the 1956 Lincoln Penny?

The list of errors includes large chunks of metal present near the mint mark or any other prominent area. A double design that is doubling of design on the coin, and unusual markings present on the coins.

Like all the other Lincoln pennies the 1956 Lincoln wheat penny was also minted to give respect to the former United States president Abraham Lincoln. Many Americans believe that Abraham Lincoln was one of the most archetypal leaders that have ever served the nation.

The Lincoln image in the coin’s reverse features the President’s likeness from the United States penny design. The coin was initially designed by Victor David Brenner in 1938.