Baguette diamonds were originally designed as a modern and functional cut in the 20th century. Baguette diamonds are now a popular choice for three-stone engagement rings due to their form and average carat size.

The baguette is a timeless diamond cut that won’t go out of style. It has recently swept both the bridal and aftermarket diamond watch industries away. It’s one of the most common jewelry styles on the market.

You’ll find baguettes in almost every store. The nice thing about baguette jewelry or baguette diamond timepieces is that you can be sure they’ll last a long time.

Since the invention of the baguette, it has remained in vogue. After all, it originates from arguably the most renowned classic jewelry era.

Another wonderful aspect of baguettes is their distinctiveness. It’s not your typical diamond. It has the flat crystal clear ice appearance, rather than the frosty flare of contemporary brilliants.

The baguette can be seen through, and it resembles a diamond in a less polished state. It’s also extremely beautiful. It has a unique beauty and refinement that only baguettes are capable of generating. 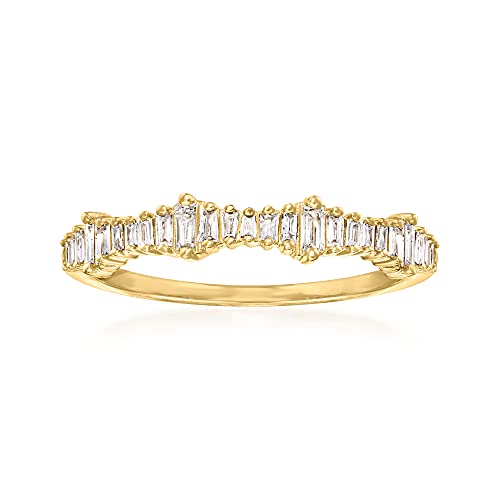 What Is a Baguette Diamond?

A thin, elongated, rectangular-shaped diamond is referred to as a Baguette. The majority of baguettes are long and slender, ranging from 5:1 length to width.

Baguettes can be rectangular or tapered, with straight or angled edges. These are known as “straight” and “tapered” Baguettes. The corners are precisely square, which is the most significant distinction between Baguettes and other similar cuts like the Emerald Cut.

Baguettes have 14 facets, which is considerably less than most traditional diamond cuts, which will generally have more than 50. They are commonly tiny and thus frequently worn as side stones for engagement rings, wedding rings, or eternity rings.

Baguettes are a Step Cut variety, as is Emerald and Asscher Cuts. One of the most distinguishable characteristics of Step Cut diamonds is their straight, clearly defined facets. This gives Baguettes a considerably different look than Round Cut diamonds with less sparkle and light-emitting ability.

Baguette diamonds are relatively low-quality compared to other diamond cuts. They have fewer facets, with 14 rather than 50 or more from other cuts.

Less luster means that inclusions and flaws stand out more. They tend to be hazy and they are simpler to damage.

This is not to suggest that you should avoid Baguette diamonds. They come in their own category as accent diamonds and look lovely when paired with practically any shape cut. Rather than lining a band with high-quality brilliant cut diamonds, Baguettes provide a less expensive method to add bulk to a ring.

It’s also worth noting that you can get stunning-cut Baguette diamonds, which are just as beautiful as other popular diamond cuts.

Baguette diamonds have a muted sparkle. They aren’t cut for a lot of sparkle, which is referred to as “fire” in the trade. Modern brilliant cuts are intended to produce fire.

Clarity and luster are primary objectives of Baguette. They do, however, have a unique kind of “glow” that is beautiful in its own right. They create what’s known as a hall-of-mirrors effect: greater, prismatic reflection and bursts of light.

However, today’s fashion has opted for a more subtle, understated style. As a result, baguettes are frequently used as the focal diamond feature in jewelry, rings, and timepieces.

What to Look For in a Baguette Diamond?

There are a few things to look for in a Baguette diamond. The most essential thing is that the stones’ hue matches the stone in the middle.

A Baguette with the same color grade will appear whiter than a brilliant cut. If you’re putting a Baguette next to a brilliant cut, select a slightly higher color grade so that there isn’t much of a difference. It should not, however, have a color grade above what is required to compliment the center stone.

A baguette does not need to be flawlessly clear, but it must be eye-clean. Because of its huge surface area, flaws or impurities will stand out more clearly.

Are Baguette Diamonds Hard to Clean?

No, it’s not hard to clean. You may care for your baguette diamond in the same way you would any other diamond.

Clean it with jewelry cleaner or soap and warm water, and select a well-made setting. You want to be sure that the corners are secure since baguettes have pointed tips.