1924 Silver Dollar features the profile bust of Miss Liberty. The 98-year-old coin is still sought after by many coin collectors.

Keep on reading to learn  more about the 1924 silver dollar and its value. 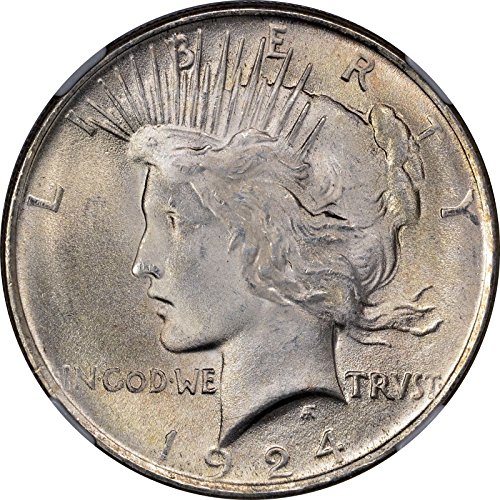 What is the grading system for the 1924 silver dollar?

Very fine– Liberty’s hair looks quite worn but a few strands of hair are well defined. A portion of the eagle’s feathers are visible.

Extremely fine– Each of the eagle’s feathers are slightly faint and the hair lines over Liberty’s brow and ear are strong.

MS 60 uncirculated– There may be a few stains or marks but the coin has luster and there are no signs of wear.

MS 65 gem uncirculated– There might be a few light contact marks but barely noticeable and the coin has luster.

What Is The 1924 Peace Silver Dollar?

The 1924 peace silver dollar is one of the last circulating silver dollars to commemorate the end of the First World War. This silver currency was designed by  a 34-year-old designer and sculptor, Anthony de Francisci.

The production of 1924 Peace silver occurred at two mints, Philadelphia and San Francisco. The main mint produced 11,811,000 pieces of the peace silver while the branch mint at San Francisco only struck 1,728,000. A total of 13,530,000 peace silver dollars were produced.

Features Of The 1924 Peace Silver Dollar

The obverse features a profile bust of Miss Liberty who wears a crown with sparkling rays. Her hairstyle looks classic  with a few hair waves hanging low.

Above Miss Liberty’s head is an inscription “LIBERTY” while the year of mint can be seen at the lower edge of the coin. Just above the year is the sculptor’s initials written as “AF.”

The coin has an inscription “IN GOD WE TRVST.” This is actually not a wrong spelling, Anthony deliberately put “V” instead of “U” to celebrate America’s victory after the famous world war.

The reverse features an eagle standing on a rock. It is holding an olive branch on its claws to symbolize peace.

You can also see the phrases“E PLURIBUS UNUM” and “UNITED STATES OF AMERICA.”

What is the highest auction price for the 1924 peace dollar?

There is no scarcity of 1924 silver coins since the 1924 issue is one of the most common series.

Where is the mint mark on the 1924 peace dollar located?

You can see the mint mark on the reverse side of the coin below the word “ONE.”