Let’s look back into the history of the 1965 quarter and reveal how much it’s actually worth, as well as a brief overview of its history.

Estimated value of 1965 Washington Quarter is: 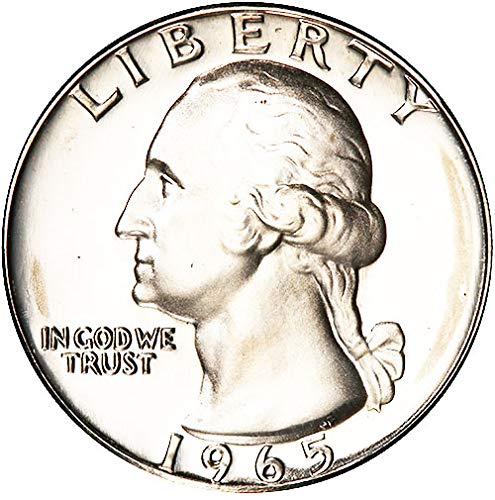 Why Are 1965 Quarters Valuable?

A 1965 Washington quarter in a very high graduation like MS68 is its scarcity, in fact PCGS has no specimens registered in this quality. In 2020, the value of this grade reached $1,300.

There are 1965 silver error quarters so it’s important to know how to identify one.

Silver quarters don’t have any copper or nickel layers showing on the edge of the coin and they are shinier.

The easiest way is to weigh the coin on a calibrated gram scale. 5.67 grams is the standard clad quarters weight and the 90% silver quarters weigh 6.25 grams.

How to Determine Coins’ Value?

Dealers of coins normally get their coin collections from fellow coin collectors and the value of the coin will be based on the market’s retail price.

What Are The 3 Most Valuable Quarters from 1965 until Today?

The 1965 quarter was the first clad coin in circulation and it was called “the key coin for commerce” by Robert Wallace who was assistant secretary of the Treasury Coin.

In 1964, there was a shortage of coins, hence, hoarding was rampant. Continued coin production depleted the stock of silver. As a result, prices of silver skyrocketed in June 1965. 93.3 cents’ is worth of silver dollar coin at market prices.

This led to President Lyndon Johnson’s decision to eliminate silver from the quarter. He then resorted to a clad composition of copper-nickel on both sides of pure copper layer.

You can still have a date and mint mark collection of circulated coins from 1965 if you are a beginner. These clad coins can still be found in the market.

Although rare, you can buy 1932 to 1964 coins from the coin dealers and you can collect the complete series of uncirculated Washington quarters.

A total of 147 coins need to be collected if you want to collect the whole series of Washington quarters. You can start by assembling the circulated clad quarters from 1965 and so on.

Collection of uncirculated coins from 1932 is sought after by advanced collectors. 1934-D, 1935-S and 1936-D are just some of the expensive coins you can get.

Here are some of the highly priced quarter errors:

1964 silver Washington quarters and 1965 cupronickel quarters were minted simultaneously and by using a certain consignment of silver coin planks dated 1964 for the year 1965.

The error silver Washington quarter is rare and has been auctioned for between $7,200 and $8,500 depending on their gradings.

This 1965 quarter error is originated by a mistake in the minting of the obverse. You need to pay attention to the phrase “IN GOD WE TRUST” and  “LIBERTY” on the front. These double mints can usually be seen on the nose and mouth of Washington on some 1965 quarters.

It is not known exactly what year the error belongs to, since the back does not show the date. But many coin experts believe that the date of minting was between 1965 and 1967.

The error comes from the fact that the coin could not be expelled after the printing. You can get this type of coin for over $400.