The quickest and easiest way to identify genuine black tourmaline is by scratching the crystal with a knife – an authentic stone will be too hard to scratch.

You can also examine tourmaline yourself to check for its usual properties. Check for smooth, rounded edges, thin grooved lines, six-sided cross sections and color viewing along the C-axis of the crystal. Contact a gemmologist to officially identify your black tourmaline.

The following ultimate guide to black tourmaline will tell you all you need to know about how to identify genuine black tourmaline, where it is found and go over its properties and uses.

How to Tell If Black Tourmaline Is Real

The simplest way to check black tourmaline is to scratch the side of the crystal with a steel knife. Tourmaline is an extremely hard stone and therefore should not scratch, but if the knife becomes blunt or scratched the stone is likely real.

Be sure to use a good quality knife as a weaker metal will become blunted easily and may not give you an accurate determination of its authenticity.

How to Examine Black Tourmaline Yourself

How to Officially Identify Black Tourmaline

By checking your tourmaline at home with either the knife test or by examining the stone yourself under a microscope for its usual properties, you can gather a pretty good idea if the stone is genuine.

However, to get an official identification you should take your tourmaline to a gemmologist. A professional will be able to accurately identify it for you and tell you if it is genuine or not.

What Is Black Tourmaline?

Black tourmaline is known as Schorl and is the most common type of tourmaline that is found. Tourmaline is a type of crystalline mineral which can contain elements such as boron, aluminium, iron, magnesium, sodium, lithium, or potassium.

It is a semi-precious gemstone that can be found in a wide variety of colors.

How Is Black Tourmaline Formed?

Tourmaline occurs naturally deep underground as a by-product of hydrothermal activity – after incredibly hot liquids which contain minerals begin to cool down.

Tourmaline, especially black tourmaline, often occurs as an accessory mineral to igneous and metamorphic rocks. It can occur as crystals scattered through rocks like granite and pegmatite.

What Is the Usual Appearance of Black Tourmaline?

During its creation, the molecules form the crystal into geometric patterns. Black tourmaline is noted for its short, rounded, stubby shaped crystals and its all-black color, which is opaque and solid.

Tourmaline is an incredibly hard stone, with a Mohs hardness rating of 7-7.5 and is resistant to chemical weathering. These distinct properties aid with identifying tourmaline, whether you are examining it yourself or a professional gemmologist. 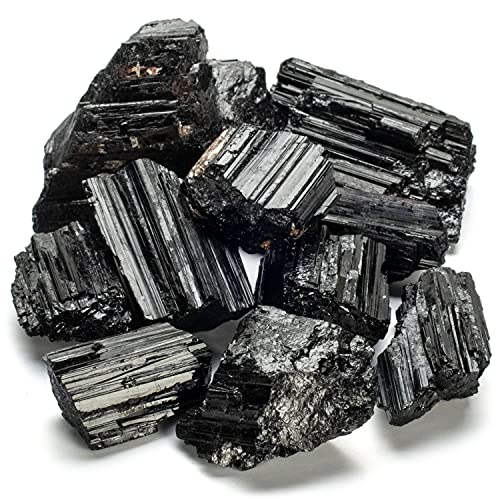 Where Is Black Tourmaline Found?

Black tourmaline and other types of tourmaline are naturally occurring and mined in many different countries around the world, including:

Why Is Black Tourmaline So Popular?

Tourmaline is one of the most popular gemstones in the world. It is the birthstone for the month of October and is associated with the Libra and Capricorn zodiac signs. Because of its popularity, tourmaline is commonly found in jewelry stores.

Black tourmaline is worn in jewelry or kept in its natural form as a stone. Tourmaline is also seen to have spiritual properties and is used for these benefits.

What Is Black Tourmaline Used For?

Black tourmaline is a popular crystal in the new age community as it is seen to have many spiritual, health and wellbeing properties. It is often used for protection, absorbing negative energy, grounding, balance, detoxification, connecting with the earth, cleansing auras, and preventing anxiety.

It is suggested that black tourmaline can be cleansing against electronic devices such as phones, laptops and televisions, by acting as a barrier against the waves.

What Other Types and Colors of Tourmaline Are There?

Tourmaline is one of the most popular gemstones because it occurs in every color of the spectrum and even produces multi-colored crystals:

Black tourmaline is actually the most common type of tourmaline found and makes up around 95% of all naturally occurring tourmaline. This means people can purchase the crystal at an affordable cost as it is seen to be a plentiful and therefore not highly valuable stone. As it is so common, black tourmaline is one of the most popular semi-precious gemstones.

How to Spot Imitation Tourmaline

Synthetic tourmaline can be made from colored glass glued together. Multicolored tourmalines such as the popular watermelon variety are often those which are imitated. Imitations are easy to spot – if your tourmaline scratches or doesn’t change color in artificial light, it is likely synthetic. You can also examine the stone under a microscope to check for the glue line or bubbles in the stone.