Moldavite is a natural glass crystal that is common mostly in Europe.

In this article, you’ll learn how to tell whether or not you’re getting the real deal or a green glass that has been chemically engineered to look like moldavite.

I’ll go through their appearance and chemical composition in the following sections.

Then I’ll show you how to avoid being ripped off by teaching you a few basic methods for recognizing things that don’t require a microscope or a degree in geology. 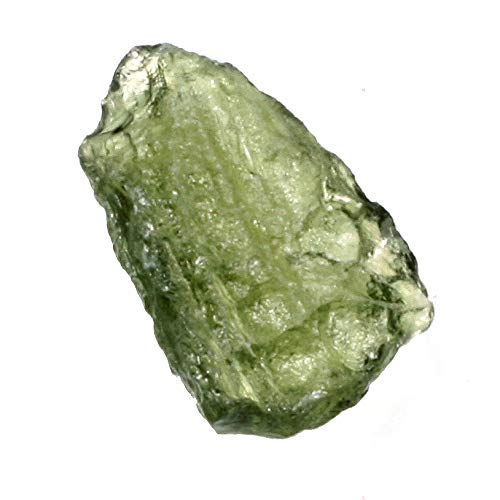 How to Tell if Moldavite Is Real?

Here are the best ways to identify if your Moldavite is real or fake:

A real moldavite have an olive green color that ranges from pale and transparent to a variety of rich forest tones with brown stripes.

The moldavite formation has often included gas bubbles. These bubbles are a reliable indicator of genuine moldavite.

The piece’s size should also be factored in; many fake moldavite pieces are extremely big. Hence, offer prices that are too good to be true.

Because they are real masterpieces of molten glass that have been meticulously molded. Many fake moldavite pieces have a glossy surface similar to glass, and the shape’s seams are sometimes apparent.

The Color Of Moldavite Stone

Moldavite is a translucent green gemstone. It must be dark green in hue, approaching that of moss. 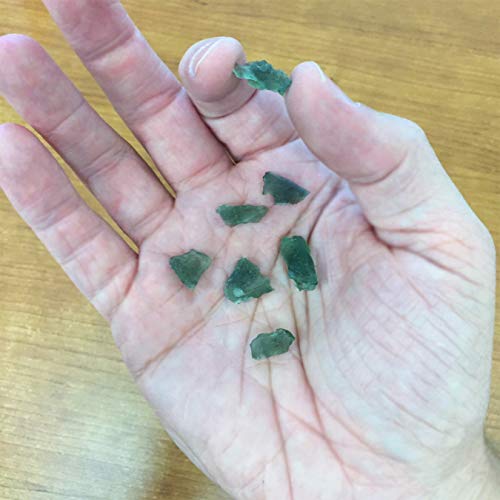 The easiest approach to tell real moldavite from fakes is to examine and handle a stone directly, because the energy emanating from moldavite varies considerably. Moldavite is defined as a rock climbing in metaphysics due to the exceptionally high energy frequency of this gem.

Many people describe feelings of warmth, tingling, and/or dizziness when they come into contact with the moldavite or even around the stone.

Real Moldavite is difficult to work with on a completely smooth, glassy surface owing to its amorphous nature. It’s possible that it’s a fake if the treasure is the right color but resembles something like a piece of glass bottle in terms of softness and thickness.

The Structure Of Moldavite Stone

We’re talking about the physical make-up of the stone. While quartz, for example, has a crystalline structure, moldavite does not (albeit it is classified as having an “amorphous” structure). In fact, moldavite’s structure is dubbed “amorphous,” which means “formless.”

The Clarity Of The Moldavite Stone

It’s difficult to polish moldavite on a smooth surface, and finding a completely transparent moldavite is nearly impossible. Moldavite is composed of silica, but it may also contain impurities such as iron and magnesium, which makes it less transparent than a stone like diamond.

Check If The Moldavite Is Easily Scratched

The Mohs scale, which is used to rate gemstones, classifies moldavite as a 5.5 on the hardness scale. The diamond has a hardness of 10, indicating that it is extremely difficult to scratch; real moldavite, on the other hand, is prone to scratches and dents and should be handled with care.

What is A Moldavite?

Theoretically, moldavite is a natural glass that may have been created by the heat of an asteroid collision millions of years ago in present-day Europe, and which has been transformed into a stone.

It’s now classified as a tektite. Moldavite is most plentiful in the Czech Republic and parts of Germany and Austria.

What Is a Tektite?

Tektites are tiny, glassy objects that come from nature and are marked by their miniscule size. Rocks at the impact site may melt as a result of the heat and pressure generated by a meteorite’s collision, producing clouds of silicate droplets that cool to a glassy condition.

Imagine what happens to sand when lightning strikes it, and you’ll have a decent sense of what creates tektites and moldavites.

Moldavites have a wide range of colors, structures, and forms. Moldavites are amorphous in form but usually take the shape of droplets, with the exception of a few anomalies that are extremely rare.

How To Avoid Buying A Fake Moldavite?

Fake Moldavite may be found on Etsy and eBay, so buyer beware for the time being. The best approach to avoid counterfeit Moldavites is to purchase directly from reputable dealers who operate their own quarry or mine.