Previously, only women got their nose pierced however in recent times a lot of men are becoming comfortable with the idea of getting a nose piercing as well. It’s a modification people get to enhance their look while for some, it’s a religious or cultural tradition to get a nose piercing when they reach a certain age.

One of the questions that come to mind while planning to get your nose pierced is which side to get it on, the right or left? A lot of factors play a part in that decision, for example, the shape of the face. Apart from that, the side where you get your piercing has different meanings associated with it which play as a deciding factor as well.

In this article, we’ll be discussing about the meaning behind getting a nose piercing on the right side so scroll down below to get all the information you need before going to get your piercing done.

What is the spiritual meaning of nose piercing on the right side?

There have been different meanings linked to getting a piercing on the right side of your nose.

The definition of what it means depends on where you’re from along with the religious and cultural background. In some places, getting a nose ring is mandatory as it holds a lot of significance while in some it’s done just for personal reasons.

According to traditional Chinese medicine, if someone has a right-sided nose piercing they’re perceived to have more of a masculine aura to them while the left side is considered to bring out the feminine side.

In some cultures, having your right side pierced is said to help in the reduction of the pain that occurs during childbirth. In countries such as India and Pakistan, the majority of women who are about to get married prefer to get a nose piercing on the right side instead of the left side.

Regardless of whichever side you choose, nose piercing, in general, symbolizes, power, wealth, and even rebellion.

In these modern times, nose rings now are mainly worn as a fashion accessory. So, not much thought is given to which side holds more significance so people get them on the side that suits their facial structure more. 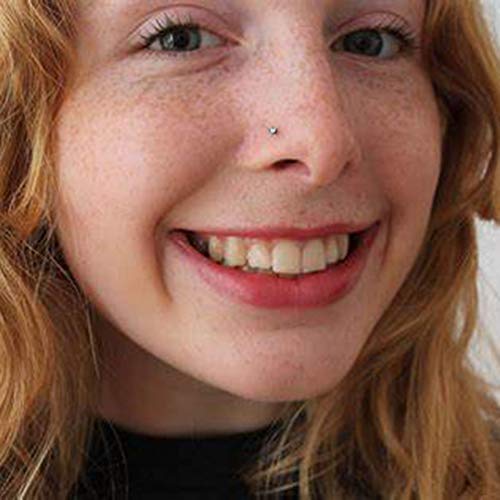 Do girls pierce the left or right side of their noses?

Whether a woman gets the left side or right side of her nose pierced depends upon how what she believes in and her spiritual level. If someone has a strong belief and follows the ancient Chinese and Ayurvedic medicine, then they’re probably going to prefer getting the left side of their nose pierced.

Although, in this generation majority of the women now don’t follow the old practices and allow themselves to have the freedom of choice when it comes to deciding which side they want to get their nose pierced.

What does right sided nose piercing mean for men?

Historically, the wearers of a nose ring were exclusively women while a guy wearing it was taboo but the times have changed and the beauty standards of the society have evolved so now you’ll see that it’s very common to find men to get their nose pieced as well.

For a man, in certain cultures getting a right-sided nose piercing would give the assumption that they’re homosexual. That being said, the end choice is yours to make as it doesn’t matter what side you get the nose piercing.

What do nose rings signify?

Nose rings can hold a lot of significance for some people and for others they could just play a part as a fashion statement. A lot of people wear nose rings to show their rebellion, freedom, and choice. In some areas, it could also signify the wealth that a person and the family they come from hold.

So the bottom line is, if you’re someone having a cultural background where the importance of the side where you get your nose pierced is great then it would be better to get it on the left side. However, if you just the nose piercing just to elevate your look then choose whatever suits you more and that you’re comfortable with it.