Body piercings are one of the top ways for people to embrace their sexuality and rebellious sides. However, the context of a rose ring differs in each culture and place. In some places, it is a sign of rebellion, and in others, it is a sign of sensuality.

So, are you wondering what does a nose ring means to a woman? After all, you need to know the full context before getting one. If you are, you have come to the right place.

Here is your complete guide on what a nose ring means.

What Does A Nose Ring Mean On A Woman?

If you don’t know already, nose rings are one of the most common piercings among the women of the subcontinent. That is because it is part of their culture. Many say that a nose ring on a woman means that it is a symbol of trying to strengthen the relations between the newly married wife and husband.

On the other hand, some people also say that a nose ring does not have any sexual context. Instead, it is just an act of tradition that every woman must go through before she gets married. So, the meaning for you depends on how you interpret the nose ring. 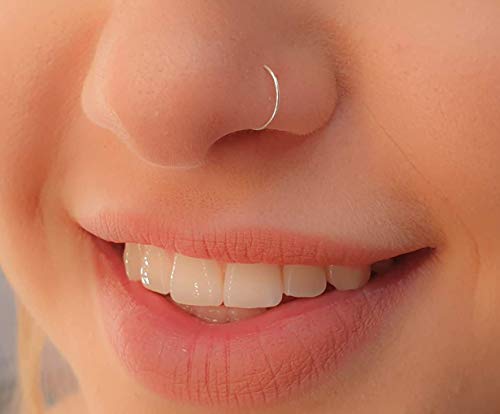 What Does A Nose Ring Mean About Health?

Are you still wondering what does a nose ring mean? Well, many people also relate the nose ring to health, especially depending on where the nose piercing is located. For example, in India, the nose is all about childbirth, fertility, and health.

What Does A Nose Ring Mean On A Woman?

Now that you understand what does a nose ring mean , it is also important to understand the various other contexts of wearing the nose ring. For example, many young women get the nose ring to rebellion against the values of their society. That is because nose rings are seen as a symbol of rebellion and boldness almost everywhere.

From young teenagers to older women, everyone uses the nose ring as the biggest symbol of rebellion. After all, it strays from the traditional values that many societies uphold. So, if you also want to make a bold statement, you can also get a nose piercing to convey this message.

Can You Use Your Earring As A Nose Ring?

If you have a beautiful earring stud that you are tempted to turn into a nose ring, we would advise you against it. That is because the nose is cartilage and ear lobes are skin and flesh. Because of this reason, you can’t use the same jewelry pieces for both as the needle size will be different.

On the other hand, the nose ring is a beautiful symbol of prestige, health, and wealth. That is why you must invest in the best nose rings for your nose. Once you do, you will enjoy it for a long time to come without hurting your nose.

What Does A Septum Piercing Mean?

Now that you know what does a nose ring mean , you must also understand the meaning of another popular nose piercing i.e., the septum piercing.

These piercings are highly common among warrior cultures as you will find warrior women having these piercings. Besides that, many North American Tribes used septum piercing to signify many things.

For example, they would get the septum piercing right after a successful return from a journey in the wilderness. The piercing would mark the end of their journey and signify success. Finally, it was also a rite of passage that welcomed them into manhood.

What Sides Should You Get Your Nose Piercing?

You will notice that almost everyone gets the left side of their nose pierced. You can get the left nostril pierced too as that is the norm and it also relates to better health. Many people take the right nostril piercing the wrong way and might interpret a woman being a lesbian because of it.

So, it is important to understand the culture and society you are living in. Once you do, you can decide what nostril to pierce.