Raichu Gx is one of the most common cards in the Pokémon packs to find. The Raichu Gx may have some great power and be useful when playing the game with your friends. However, the value of a Raichu Gx says something else.

The number 20 card is easy to find and in possession of many collectors. Are you looking to know how much is it worth? Keep reading to get a detailed insight into a Raichu Gx card. 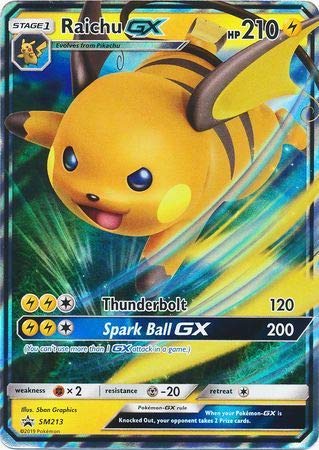 How Much Is A Raichu Gx Worth?

With the growing demand for these trading cards, the value of the Raichu Gx card may see a rise with time. But let’s talk about the present worth of this card. Trading cards are graded, so every grade is the main factor in the difference in the value of these cards.

What Has Been the Trend Of the Price of Raichu Gx?

The ungraded Raichu Gx has been fluctuating since the start of 2021. It recorded a high of $4.25 in the mid of 2021 but saw a fall after that. Since then, its price has been consistent at around $2 to $3.

The Grade 7 Riachu Gx came into the market in March 2022 and has had a price of $4.99 since then. But with time, the grade 7 cards will also record a fluctuation in the price due to demand and other factors.

Looking at the trend of the Raichu Gx at the start of 2021, it was a very high-value card. But, first, the grade 9 and PSA 10 graded cards were sold at a very higher value, and after that, the card’s value kept declining as more cards came into the market.

What Is The Difference Between A Regular Raichu Gx And A Secret Rare One?

As you know, the Pokémon cards have many series and were published in many variations. For example, one of the published series includes one known as Secret Rare.

You may think it would be a very high-value card by the name. Let’s discuss the difference between a regular Raichu Gx and a Secret rare.

The value of every trading card keeps on fluctuating, and this is why we aren’t going to discuss the monetary factor to avoid further confusion. The secret rare is numbered as 75/73.

A secret rare Raichu Gx has many light colors. Pink, blue and is a combination of many others. It is a very different-looking card than other Raichu GX.

While playing, the Secret rare Raichu Gx holds a special value, and the damage done is great. It can paralyze the opponent’s active Pokémon at one go.

How Rare is Riachu GX?

Every Pokémon card has a different serial number mentioned at the bottom left of every card. This number represents the series the card belongs to, and for a professional, a glimpse of that number would be enough to value the card.

Raichu Gx cards are easy to find and common to find. However, there is some series number of the same card that is rare, and not many are present for sale.

Which Raichu GX Series is Rare?

If your Raichu GX has 29/73 mentioned, it is an ultra-rare card. The rarest out of all the Raichu Gx cards is the pre-release ones. They are worth a lot, and you may never have seen them.

This is because only 10 to 15 cards of these Raichi Gx Pre-release series are available worldwide.