Sammy Sosa is a retired right fielder. The Dominican-American is best known for being one of the hardest hitters in the game during an era marked by the overuse of performance-enhancing drugs.

It was on June 16, 1989 when Sosa made his MLB debut. Slammin’ Sammy’s first career home run came against Roger Clemens, who is also a fellow PED user.

Most baseball fans remember the popular right fielder during his Chicago Cubs days. Aside from being a one-time NL MVP winner, he is also a 7-time All-Star player, making his cards desirable.

How Much Is Sammy Sosa Rookie Card Worth?

With the release of Sammy Sosa’s “Long Gone Summer” ESPN documentary, his rookie cards have been rising in popularity.

The most expensive Sammy Sosa rookie card is the 1990 Bowman Tiffany card. They cost between hundred dollars to thousand dollars, depending on several factors including quality and grade of the cards.

The 1990 Bowman Sammy Sosa rookie card is ideal for entry-level card collectors who are on a budget.

This card from the 1990s is simple but classic. The card has a big image of Sammy in the middle while there’s a green-yellow-red border. These cards are probably the first thing you can think of when you think about 90s baseball cards.

You will love the Tiffany version of this card. The card is made with higher quality. It is much thicker and durable than the other rookie cards. 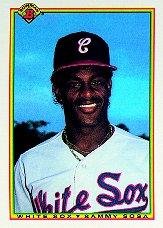 Leaf Sammy Sosa cards were all about showing the action. This card features Sosa slam a homerun.

If you’re looking for a card with graphical elements, this ain’t it. This card is about intense moves, it shows Slammin’ Sammy laying down a bunt. 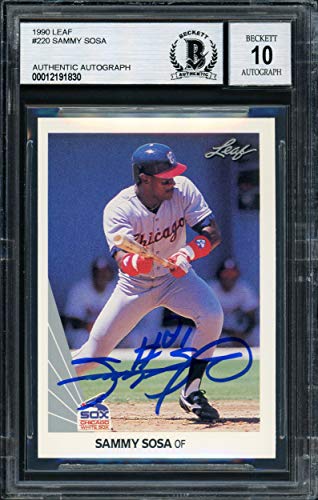 When it comes to rookie cards, Topps has always been one of the leading brands.

While Topps cards were not everyone’s cup of tea,  especially for baseball collectors as they preferred Bowman cards, Topps 1990 Sammy Sosa rookie card is becoming one of the most desired collector cards today.

It is also worth noting that there is a Canadian version of this card and it is called the O-Pee-Chee. It is the same as the Topps card, the only difference is it has a bilingual background. 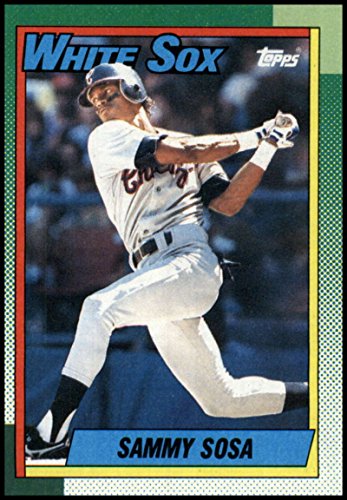 This could be a great addition to your card collection if you’re on a budget. This card particularly is not hard to get nor is it the most expensive card in the world.

This card is all about simplicity. The card has a simple design and shows Sammy Sosa running. 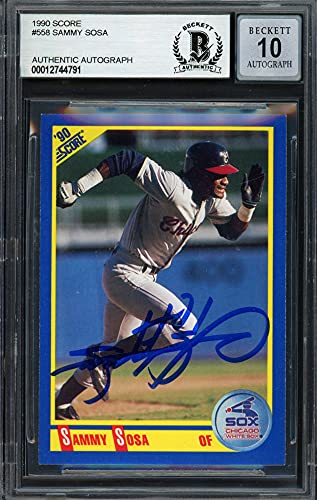 You will not find Sammy Sossa in action on the 1990 Upper Deck, you will see him smiling in the image instead.

The card is not flashy and not the most developed card. For their 1990 set, Upper Deck has kept it simple. The border is green with white and there’s a yellow thin border at the top of the image.

There were many Upper Deck Sammy Sosa printed back then. This means that finding this card is also an easy task. 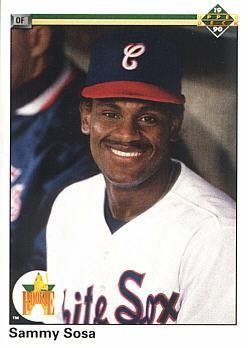 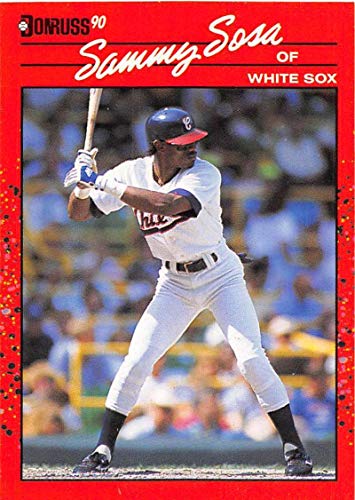 Unlike the other cards that’s all about simplicity, Donruss cards are a bit more colorful. Although this card is a bit different from the others, there’s a 90s vibe to it.

Due to the high print run, Donruss cards are not expensive, making it perfect for card collectors who like inexpensive flashy cards.